Maya is hard to disgust. It’s another one I think she got from her mum. I am mildly disgusting myself and I guess she assumes I’m normal.

My own disgust mechanism is a bit faulty.

I’m not a big fan of blood and gore. I don’t like documentaries where chimps eat monkeys and even thinking about a caterpillar being consumed from within by wasps that have hatched in its innards makes me…hmmbbb…hmmbbb. Pass me a bowl. 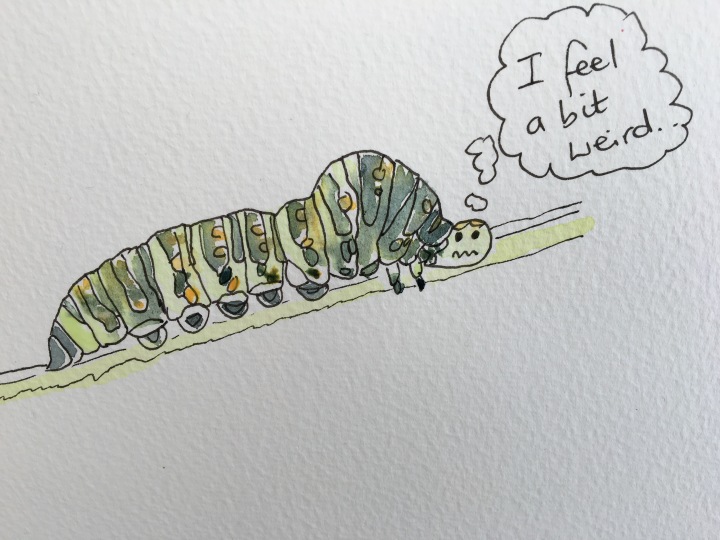 I recoil at the sight of a tub of wriggling maggots or pulsating mass of spiderlings.

But I grew up in a house where it was totally normal to talk about your digestive transit at the dinner table. Even now it doesn’t occur to me not to tell poo stories when people are eating.

My dad is a civilised man but doesn’t think it in any way odd to discuss at mealtimes the pus that came out of his infected root canal or the carbuncle he got from eating too much condensed milk.

I honestly feel no revulsion at these tales or their timing. I love loads of revolting things.

I like squeezing spots and once paid my brother 50 pesetas for a two-minute go at peeling his sunburnt back. He was horrified but wanted my money.

I love getting hair out of plug holes too, especially when you pull on a fine strand and it offers up an unexpected bounty of goopy tangled matter. How satisfying is that?

I do remember occasions where I’ve felt repulsed by everyday things. One time, my friend Louise had a really clotty nosebleed at school and when my mum dished up yoghurt at teatime I couldn’t stomach its viscosity. I told her why and she told me to man up.

(Oh yeah, and my mum made me chew a rabbit dropping once cos she thought it was a raisin but that just tasted of hay and wasn’t bad at all).

I was freaked out when I dug up a mummified Guinea pig in our new garden last year and finding wriggly red worms inside the pond filter also made my skin crawl, even once I’d learnt they were good for the system.

More recently, a Chinese student in my class excitedly handed me a takeaway container and I lifted the lid to be confronted with 15 duck tongues in black bean sauce.

I gave it my best shot but had to spit one out in the bin in front of her. I know that’s bad but it was bad. Gristle chunks in salty jelly. And she wasn’t bothered. She took care of the other 14 at break time.

So I’ve accidentally told you about 500 things that do disgust me. But my real point is that mostly, in general, I’m not offended by a lot of the stuff other mums seems to find abhorrent.

Yet, as a parent, I sometimes feel compelled to feign disgust, even when I don’t think a hygiene or seemliness violation has occurred.

I don’t believe in doing things just because society expects me to. Its logic is so often lacking.

But sometimes I feel like a sub-human scum-beast if I don’t join in a bit when a more competent mum who knows she is right tells her child that something is vile. So I try half-heartedly to concur:

‘Oh no, Maya. Look what you’ve done there. You’ve gone and put the tomato down on the grass and then eaten it, you filthy filthy thing.’

‘But Mummy. You usually wipe the tomato round the toilet bowl before you put it in your mouth.’

I hate myself for giving Maya mixed messages about what’s okay and what’s not. Or worse, planting the notion in her head that other people’s views carry more weight than your own. Not so.

But I’m a little bit scared of the grossed-out crew and I feel like I’m being ticked off by proxy if I don’t mimic their horror.

Anyway. Maya knows what I’m really like and so I shouldn’t be at all surprised to note that she now has a fascination for all things unsavoury.

And lately her absolute favourite tell-it-again stories are all about behavioural scuzz.

She loves the one where my friend’s husband felt sick and was sniffing the freshly bleached floor to try and get his gag reflex going.

It didn’t work so she advised him to sniff the over-ripe kitchen bin instead. He inhaled deeply and said hello to last night’s dinner.

Maya made me tell that one six times at bedtime a few weeks ago.

James tells her a story too about an old friend with a smelly belly button. He used to stick his finger in it, swipe out a generous scoop of flavour particles and then stick it under your nose. That one kills her. She can’t get enough of it.

She also loves watching YouTube videos of animals being born and doesn’t flinch at all at infant hooves protruding from a deer’s vagina. Or at all the gunky mucus that slips out when a mother turtle lays her eggs.

I kind of like it that she’s not squeamish. And she does sort of know that some things are disgusting and naughty.

A further skill we’ve both modelled by accident is the keeping of secrets from one parent with the collusion of the other. She demonstrated her grasp of this recently to James:

‘I’ve got a secret, Daddy. Sometimes I wee in the bath when Mummy gets out.’

‘I’ve got another secret, Daddy. I actually sometimes wee before Mummy gets out.’

I’ve got a secret too, pickle.  Mummy’s so grubby she’s only forty-nine percent bothered.

I’m aware that it’s not a great idea to lick the MRSA off a hospital door handle. And I’m super careful with raw chicken and everything it touches for fear of it taking out my whole family. I spray and wipe down the kitchen sides all the time and clean the house once a week. But I think I fall way short of some mums’ standards for hygiene and decorum.

And I’m not sure that I care. From what I’ve heard, loads of bacteria are either benign or essential or help us build immunity.

And poo chat can help you find out what’s normal and what’s not. Like everything else about the human body, I find our digestive systems awesome and mysterious.

So I’m glad I’m not training Maya to be preoccupied with all the places the tiny germ-devils might be lurking or encouraging revulsion to stifle her innate curiosity and learning.

Maybe I’m being a bit smug here though, when self-satisfaction isn’t due. Maybe it’s not a parenting choice at all, whatever approach you take.

My dad is really hairy and I’m scared of flying, like it’s something humans shouldn’t be able to do yet.

Perhaps, just as the very clean people are very of our time, my family and I are way back along the evolutionary chain, scratching around in the cave dirt and eating each other’s fleas.

It’s quite nice back here, though. I’m glad my daughter has joined us.